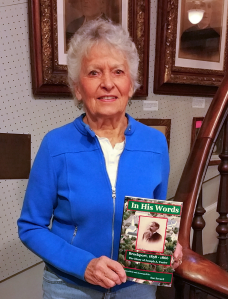 Since 2013, Sue Savard has led a volunteer project to renovate and restore the Emily L. Knapp Museum of Local History at 49 State Street in Brockport. While organizing and documenting the museum’s collection, she came upon the diary and scrapbooks of Joseph A. Tozier (1836-1894). Feeling they needed to be shared, she transcribed his handwritten words and included in the book appropriate selections from Joseph’s scrapbooks.

Savard’s book has just been released: In His Words, subtitled, Brockport, 1858 – 1866 The Diary of Joseph A. Tozier and published by Create Space, a subsidiary of Amazon. It is for sale at the Lift Bridge Book Shop, 45 Main Street in Brockport and on Amazon. There will be a book signing on Saturday, February 4 from noon till 2 at Lift Bridge Book Shop.

Joseph A. Tozier was a Brockport resident, an educator, scholar, school commissioner, entrepreneur, and observer of people and institutions. Through his eloquent writing Tozier captures the pulse of the social, cultural, and political life in Brockport during a critical time in our nation’s history. Using his writing and speaking ability, he chronicles and comments in the local newspapers and at area events during a period of time that saw many changes in technology, customs, and political discourse. While continually striving to improve himself through study, he eventually became a pharmacist and owner of a drug and bookstore in Brockport.

Sue Savard is a graduate of SUNY Albany and The College at Brockport. After college, she taught business education subjects in Brockport and Albion. In retirement, she has been volunteering at the Knapp Museum. About the experience of delving into the words and life of Tozier, Savard said, “Through Joseph’s eyes and ears and writing, I felt as if I were experiencing the vibrancy of Brockport’s early years.”

The Emily L. Knapp Museum is a municipal museum associated with the Village of Brockport. The museum is located on the second and third floors in the former home of one of Brockport’s most prominent families, the Seymours, while the first floor contains the Village of Brockport offices. Those who visit Brockport’s collection of local history will feel they’ve entered a time when the Erie Canal was the bustling commercial center of this Victorian village: when ladies wore high-laced shoes and skirts that scraped the slate sidewalks, and the gentlemen sported tall silk hats; when phonographs and stereopticon views as well as novels by our famed authoress, Mary Jane Holmes, entertained the masses. Don’t take our word for it, see for yourself. View more posts